Last year tablet shipments were down for the first time since 2010. That’s led a lot of folks to try to come up with explanations. Maybe big-screened smartphones are eating into tablet sales. Maybe people who already own tablets don’t feel the need to upgrade to new models as quickly as they would upgrade phones. Or maybe they were just a passing fad.

The truth is probably a lot more complicated… but it does leave me wondering what exactly people are using their tablets for. 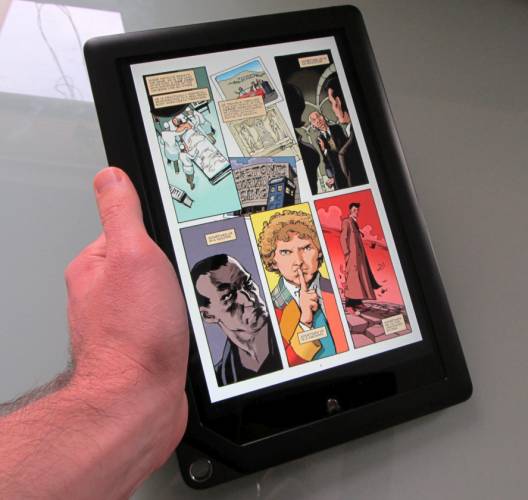 Personally, I’ve never really seen the point in using a tablet for email, social networking, or web surfing. I’d rather do all of those things with my smartphone or a laptop.

I do occasionally read eBooks on a tablet, but I typically prefer to do that with a dedicated eReader with a black and white screen, long battery life, and no distracting notifications.

But there is one area where I find a tablet to be the best tool for the job: reading digital comic books or magazines.

Comics and magazines were originally designed for large pages and they can be tough to read on a smartphone screen… even if you have a phone with a 6 inch screen. Sure, there are apps that let you read comics panel-by-panel or zoom in on magazine pages. But I’d prefer to view pages in their original layout.

In fact, when I killed my Nexus 7 a few months ago with one experiment too many, I decided to pick up a used NOOK HD+ tablet specifically so that I’d have a cheap 9 inch tablet with a high-res screen that I could use to read comic books.

It’s not the fastest tablet around, but I use it almost exclusively to read comics using Marvel Unlimited, Google Play Books, and Perfect Viewer and it’s more than worth the $90 I paid for it.

During a recent 14-hour plane ride, I also loaded up a few movies, but for the most part I use this tablet for reading comics and graphic novels, and it does a great job .

I’m sure there are other reasons to use a tablet instead of a laptop or smartphone… and I try to play some games, do some web browsing, and perform other tasks whenever I’m reviewing a tablet. But for most things, I prefer a device with a dedicated keyboard or a device that I can fit into my pocket. For reading material with a strong graphic element, I prefer a big screen.

What about you? If you’ve got a tablet, what do you use it for?

If you’re thinking about picking one up, why? And if you’re waiting for tablets with different features, what are they?

97 replies on “What do you use tablets for?”