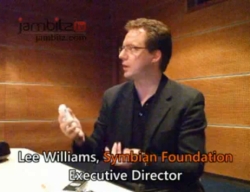 Symbian is an operating system that’s designed for mobile phones. But as we’ve recently seen, you can run the operating system on an x86 processor like the Intel Atom chip or on ARM based processors. When asked about netbooks at a recent event, Symbian Foundation executive director Lee Williams responded that the company isn’t actively working with any netbook makers. But he did have a few thoughts about how a Symbian powered netbook should work.

First, he says that it wouldn’t be hard for a manufacturer to build a netbook that uses the Symbian operating system. But Williams says he’d like to see a netbook that works more like a mobile phone than a laptop. For instance, when you close the lid of a laptop, it typically goes into a suspend mode and you lose any connections you have to social networks, instant messaging clients, email services, and so on. He’d like to see a netbook use Symbian the same way a cellphone does and keep those connections going.

Of course, in order to do that, you’d need to figure out a way to build a device with a battery that lasts for days, not just hours.

Williams also says he’d like to be able to interact with services all the time, whether he’s online or offline. Overall, he says netbooks are already becoming what he thinks notebooks always should have been. They’re cheap, super portable, and capable of running Linux or alternate operating systems and not just Windows. But it sounds like he wouldn’t be too happy to see someone throw Symbian on a standard netbook with an Intel Atom CPU, 10 inch display, and 160GB hard drive without making a few modifications to provide better battery life and always-on capabilities.

You can see Williams discussing the issue in a video after the break.

7 replies on “What could a Symbian netbook look like?”