OpenELEC is a Linux-based operating system designed to basically run one app: the Kodi media center. You can install OpenELEC on a PC to turn your computer into a multimedia device with a full-screen user interface for watching movies, streaming online video, listening to music, and performing other tasks.

Now the folks behind OpeneELEC have teamed up with hardware maker WeTek to launch the OpenELEC Box. It’s a limited-edition TV box that comes with OpenELEC pre-installed (plus it has the OpenELEC logo on the box).

You can order one from the OpenELEC webshop for $90.76 or 99 British Pounds. 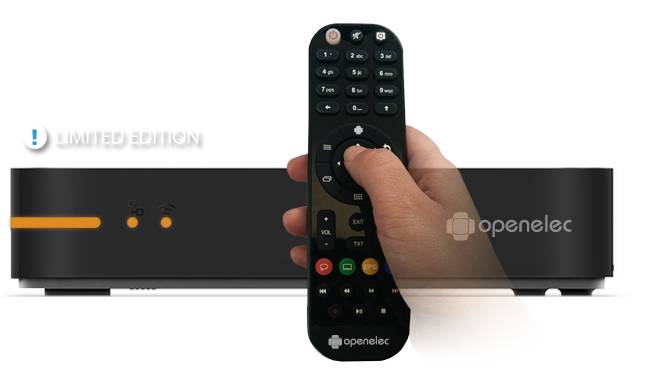 You can connect the box to any TV to stream online video, play media from a connected hard drive or shared network drive, or run third-party Kodi plugins.

But the box is also features TV tuners, allowing you to watch or record live TV. There are models available with DVB or ATSC tuners.

While OpenELEC hasn’t released detailed specifications for the box, it appears to be based on the same hardware as the WeTek Play, which has an Amlogic AML-8726 MX dual-core ARM Cortex-A9 processor, Mali MP400 graphics, 1GB of RAM, 4GB of storage, 802.11b/g/n WiFi, Bluetooth 4.0, 10/100 Ethernet, and 3 USB ports.

But the WeTek play ships with Android-based software, while the OpenELEC box runs OpenElec and Kodi.