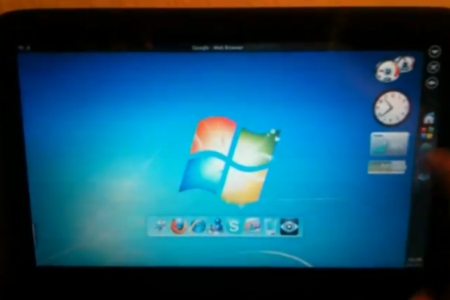 Neofonie’s WeTab is an 11.6 inch tablet with a custom Linux user interface. But under the hood it has an Intel Atom N450 processor — the same chip found in dozens of netbooks, so it was clearly only a matter of timebefore someone figured out how to install Windows on the tablet.

One user took the plunge, and went a bit above and beyond by installing two different utilities designed to make Windows easier to use on slate computers with capacitive touchscreen displays, EasyBits Blue Dolphin and Mirabyte FrontFace. Both seem to run reasonably well on the hardware.

The WeTab has a 1366 x 768 pixel capacitive touchscreen display, 1GB of RAM, 16GB to 32GB of memory, an SDHC card slot, 2 USB ports, Bluetooth, WiFi, and optional 3G. The slate has an ambient light sensor, accelerometer, mic, 1.3MP camera, and speakers. On paper it’s a pretty interesting tablet, although the fact that the managing director of the company felt the need to write positive reviews on Amazon under fake names doesn’t really bode well.

You can check out the video of the WeTab running Windows after the break.

Update: It looks like the video originally appeared at the WeTab Community forum. You can find more information in the forums.

6 replies on “WeTab Linux tablet gets an (unofficial) Windows update”