First unveiled as a Samsung C-Lab project ahead of the 2016 Consumer Electronics Show, the WELT has now hit Kickstarter. The team of Samsung employees who developed the project have launched WELT as a standalone business and they’ve already raised more than the $30,000 in funds they were hoping for… which means the first WELT devices should begin shipping in January, 2017. 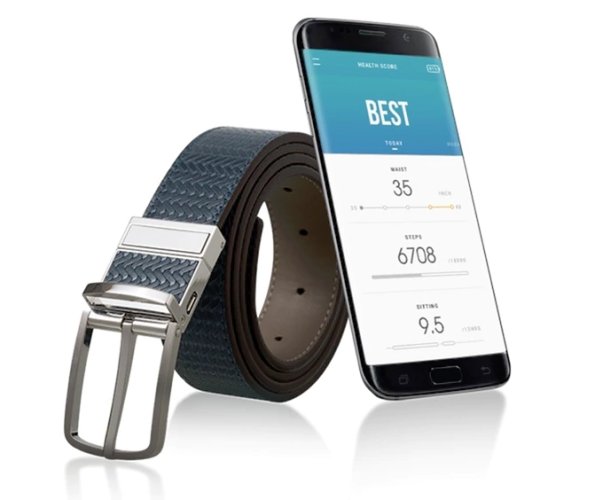 At its most basic level, the WELT is a belt that comes in a range of sizes and styles. The belt is leather and the buckle is made from a zinc alloy, and there are style and color options designed to appeal to men and women. As for sizes, there are small, medium, large, and extra large options for folks with waists between 28 and 44 inches.

You can pre-order a WELT for $99 and up during the crowdfunding campaign.

Unlike a standard belt, the WELT has sensors to track how snug you’re wearing the belt, and it can share that data with a smartphone app, allowing you to keep track of your waist size over time.

Other features are pretty standard activity tracking stuff, including a pedometer function for counting your steps throughout the day, Bluetooth 4.1 for syncing your data with an Android or iOS device, and a micro USB port for charging.

The WELT should get about 20 days of battery life per charge, thanks to a 90 mAh battery and the fact that there’s no screen on the device.

I’ve been wearing a fitness tracker clipped to a belt for the past few years, so I can sort of see the appeal of a device like the WELT (I’ve tried wristband-style activity trackers, but they don’t really work for me). But I’m still a bit skeptical: if you wear different belts with different pants, you may need to invest in more than one WELT to count all of your activities… and would you wear this belt to the gym, on a run, and at the office?

Still, it’s nice to see a second Samsung C-Lab project graduate move from prototype to crowdfunding. The Sgnl watch strap that turns your finger into a Bluetooth earpiece has already raised over $450,000 in the first week of its Kickstarter campaign.