The HP TouchPad is a pretty decent tablet with a 9.7 inch, 1024 x 768 pixel display, a fast 1.2 GHz Qualcomm Snapdragon dual core processor, 1GB of RAM, and 16GB to 32GB of storage. It may not have sold very well when HP tried to charge $499 and up for the tablet, but when the company discontinued the TouchPad and started charging as little as $99, stores sold out almost immediately. 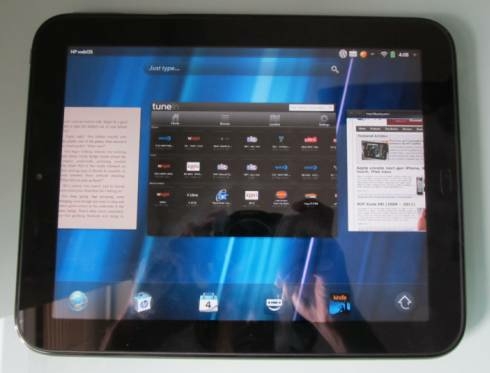 But the price tag wasn’t the only thing holding the TouchPad back. The webOS software that comes with the tablet was decent, but there aren’t as many high quality apps for webOS as for other tablet operating systems such as iOS or Android.

So the TouchPad became particularly popular with folks looking to install Google Android on the cheap tablet. It’s now possible to run versions of Android 2.3, Android 4.0, and even a few different Linux distributions on the TouchPad.

But there are a few things that webOS actually does quite well. For instance, the app switcher is pretty slick. You can swipe your finger up from the bezel below the screen to bring up large previews of currently running apps.

Flick left or right to see more apps. Tap an app to open it. Or swipe up on the app to close it.

The app switcher is one of my favorite features in webOS. But it turns out you can do something similar in Android 4.0. 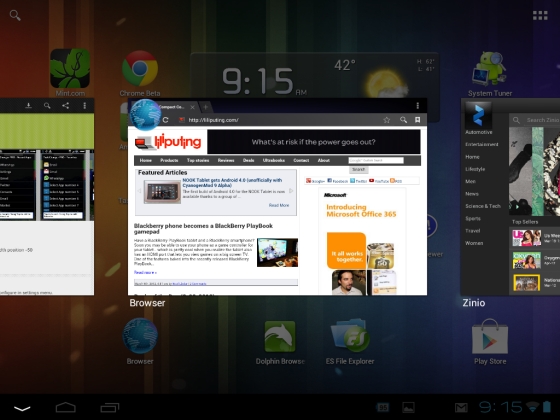 It looks like the webOS task switcher and works much the same way. The biggest difference is that swiping up on an app doesn’t actually close it — it simply removes that app from your recently used apps list.

You also need to install a third party app called Task Changer Pro if you want to be able to access the recent apps list by swiping from the screen bezel. WebCM9 simply replaces the default Android 4.0 recent apps menu with a webOS-style menu.

WebCM9 is currently available for CyanogenMod 9 Alpha 2, AOKP Milestone 4, and CyanogenMod 9 nightly releases from between February 28th and March 5th.

You can install the utility using ClockworkMod Recovery with the following steps:

This will replace the standard Android 4.0 recent apps menu with WebCM9. Now all you need to do to use the new task switcher is press the recent apps button in the toolbar.

If you want to use bezel gestures to bring up the menu, you can download and install Task Changer Pro from the Google Play Store and configure it so that the “left lower zone action” and “right lower zone action” options are set to “show recent ICS.”

You can find more details on installing and configuring Task Changer Pro at the webOS Nation forum.

14 replies on “WebOS-style app switcher for Android 4.0 on the HP TouchPad”