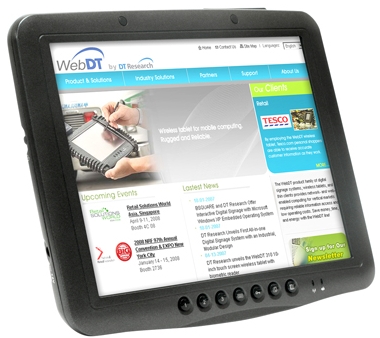 The WebDT 312 isn’t the most exciting tablet I’ve ever seen, but this little guy which showed up at the FCC this week has a few things going for it which really make it stand out.

First, the WebDT 312 has a 10.4 inch 1024 x 768 pixel display. I know there are a lot of people who have been waiting for a company that’s not Apple to release a tablet with a 4:3 display instead of a widescreen aspect ratio, and it looks like DT Research is stepping up to the plate.

Second, would you take a look at all those buttons on the front? Those are bound to make navigation a bit easier on this slate PC which lacks a physical keyboard.

The FCC pictures show a pretty mundane looking tablet, but if you visit the DT Research page it looks like there will be a kind of scary case available as well. It’s either bumpy around the edges to make the tablet easier to grip or to add a bit of ruggedness… or both. There’s no word on pricing yet.

2 replies on “WebDT 312 tablet passes through the FCC”