The Wandboard is a tiny computer or developer board which looks a bit like a Raspberry Pi, but which has a starting price about three times as high and which packs significantly more power.

That’s because while the Raspberry Pi has an ARM11 single-core processor, the Wandboard features a faster Freescale i.MX6 ARM Cortex-A9 processor. Up until now single and dual-core versions have been available, and now Wandboard is offering a new quad-core model. 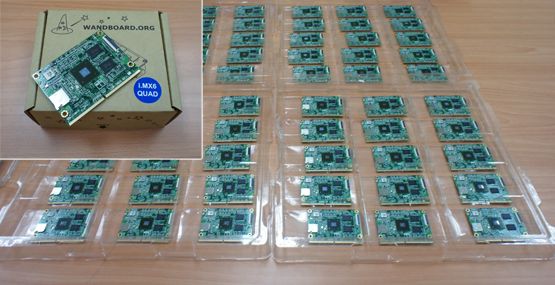 The Wandboard Quad sells for $129, while the single and dual-core models sell for $79 and $99, respectively.

But not only does the Wandboard Quad have more processor cores than the cheaper models, it also has more memory, and it’s the only model with a SATA connector for hooking up a hard drive or solid state disk.

The Freescale i.MX6 Quad is a 1 GHz processor with Vivante GC2000 graphics. It’s not the fastest ARM Cortex-A9 chip around, but it offers decent overall performance. It’s also a good choice for this type of developer board because not only does it support Google Android, but Freescale offers plenty of documentation for the chipset and developers are able to run Ubuntu and other Linux-based operating systems on devices with Freescale chips.

These little computers are aimed at developers, hackers, and DIY computing enthusiasts rather than the general public. They don’t include a case, you’ll need to install the operating system on a microSD card yourself, and it’d probably take a bit of elbow grease to turn a Wandboard device into a full-fledged desktop PC or media center.

But they provide a way to test apps on a low-cost ARM-based system and they could be an inexpensive solution for anyone looking for an inexpensive computer that doesn’t need to have bleeding-edge performance.