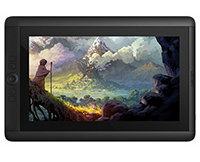 Over the past few years “tablet” has come to mean a mobile device you can use to surf the web, play games, and run other apps. But Wacom’s been making a different kind of tablet for years. The company’s “graphics tablets” can be hooked up to a computer and used by digital artists to draw and paint on a digital canvas.

But this year Wacom announced plans to offer a true mobile tablet which you could use to create art on the go — no separate PC required.

The company hasn’t said much about the tablet since March, but new benchmark tests that showed up at the GLBenchmark website could provide a few clues about the upcoming device.

The test results are for a device that appears to be called the Wacom Cintiq Companion Hybrid 13HD, although the name could just for internal use. Either way, it does suggest that the tablet has a 13 inch HD display.

While that’d make it larger than most tablets, a big screen would make sense for a model aimed at designers and artists.

If the screen resolution looks funny, that’s because these test results usually don’t account for the Android menu bar, so we’re probably looking at a machine with a 1920 x 1080 or 1920 x 1200 pixel display.

As for the processor, MiniMachines notes that the frequencies suggest we’re looking at an NVIDIA Tegra 4 ARM Cortex-A15 quad-core processor.

That’d also be a smart move for a few reasons. Not only does NVIDA play up the graphics prowess of its mobile chips, but NVIDIA’s GRID computing platform lets you stream desktop PC apps from a Windows computer with an NVIDIA graphics card to a mobile device.

In other words, while it looks like Wacom’s mobile tablet runs Android, you may be able to use it to interact with full-blown Windows apps such as Photoshop, Lightroom, or other professional graphics software.

There’s still no word on a price or launch date for the tablet — and it’s best to take benchmark results spotted online with a grain of salt. It’s not that hard to fake these things. But there’s nothing unreasonable about the idea of a Wacom tablet with a Tegra 4 chip, a 13 inch full HD display, and Android software — especially if there’s support for using the mobile tablet as a graphics tablet for PC apps.