The Wacom One is a 13 inch graphics tablet that lets digital artists work with a pressure-sensitive pen. It’s not a standalone tablet, but rather an input device designed to work with Windows or Mac computers… and it’s also the first Wacom tablet that’s also compatible with Android phones, tablets, and other devices.

With a $400 Price tag, the Wacom One is also the company’s most affordable pen tablet to date. It’s available now from Wacom and should be available soon from Amazon and Best Buy. 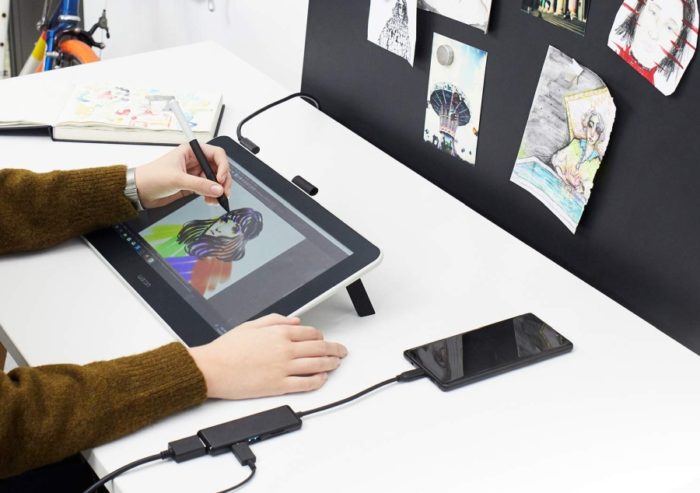 It’s designed to work with a Wacom One EMR pen that supports 4096 degrees of pressure sensitivity and 60-degree tilt angle. And Wacom says the tablet supports right-handed or left-handed use.

Now for the bad news — the Wacom One doesn’t support USB-C connections. That means you need to connect it to both the HDMI and USB ports of a PC, Mac, or Android device… plus plug in a power cable. Odds are that your Android phone or tablet doesn’t have an HDMI port, so in order to use the Wacom One with an Android device you’ll probably need to use a USB hub.

Wacom is also launching a new Cintiq 16 tablet with support for a Wacom Pro Pen 2 EMR pen featuring 8192 levels of pressure sensitivity. That model sells for $650 and is compatible with Windows and Mac, but not Android.

One reply on “Wacom One is a $400 drawing tablet that works with Windows, Mac, and Android”