The Windows model is a full-fledged PC that can run Photoshop, Lightroom, and other professional software, while the Android model can be used like a normal Cintiq when you plug it into a computer. On the go, you can use it as an Android tablet and use Android graphics apps to sketch on the go.

Both models have 1920 x 1080 pixel displays, digital pen input with 2048 levels of pressure sensitivity, and very high price tags. The Cintiq Companion Hybrid will start at $1499, while the Cintiq Companion will run $1999 and up. 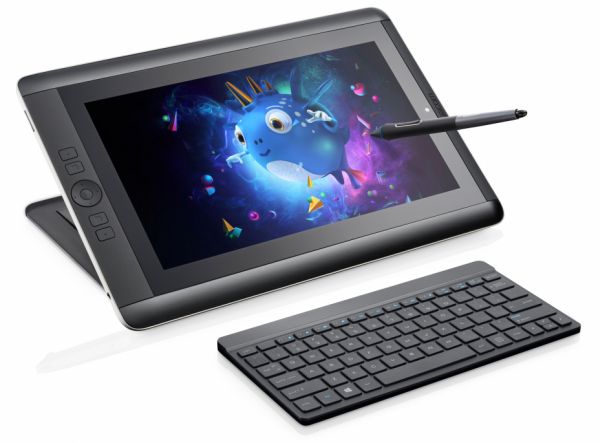 When considering those prices, keep in mind that Cintiq 13HD graphics tablet typically sells for around $1000 — and that’s the price for a graphics tablet that’s useless when it’s not connected to a PC. For creative types and graphics professionals that want a single device that fits all their needs, there aren’t a lot of alternatives to the new Cintiq Companion devices, which could help justify the high price tags.

Here are detailed specs for each tablet:

Both the Windows 8 and Android tablets will come with an adjustable, detachable stand, a carrying case, and a Pro Pen with its own case and 9 replacement nibs.

As you’d expect, Wacom put a lot of attention into display quality for this tablet. What the company didn’t necessarily focus on was making these devices as small or portable as an iPad, Samsung Galaxy Note, or even a Microsoft Surface Pro.

With weights approaching 4 pounds, these aren’t tablets you’re going to want to hold in your hands for a long time. But they’re not really designed to be used for playing games, surfing the web, reading eBooks, or watching videos (although you can do any of those things). Instead, they’re designed to let you take your graphics workstation on the go — and when you  look at things that way, 4 pounds is actually pretty light for the kind of power the Cintiq Companion tablets offer (to those that can afford them).