Vulkan is a new graphics technology from the makers of OpenGL. It’s designed to be more efficient than its predecessors by offering developers direct access to graphics hardware… although that also makes it more complicated to use than OpenGL, which is why the Khronos Group will continue to develop that software as well.

After about a year and a half of development, Vulkan 1.0 is now available. Khronos has published the specifications, drivers, software developer kit, and other resources.

Vulkan is cross-platform, which means that it can work with a wide range of hardware. AMD, NVIDIA, and Intel have all released graphics drivers using the technology, and there’s also support for mobile devices.

Apple hasn’t officially added support yet, but Google is working on Android support, and mobile chip makers including Qualcomm are working on it as well. Imagination’s PowerVR Series6 graphics can already leverage Vulkan 1.0.

Krhnos is also releasing Khronos as a royalty-free, open standard, which means it costs nothing for hardware and software companies to integrate support for the graphics technology. 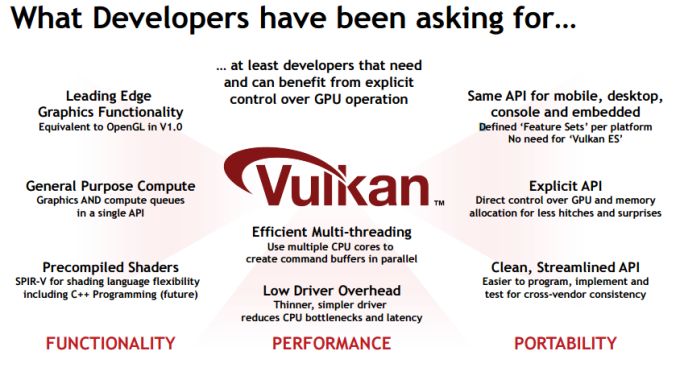