There’s probably no cheaper way to experience virtual reality (or at least 360-degree video experiences) than with Google Cardboard. Just pick up a kit for around $10 – $20, fold it together, and slide your phone into place to turn it into a VR headset.

So are people actually doing that? Yep.

Google says in the 19 months since Cardboard was first unveiled, more than 5 million Cardboard headset have been shipped and in just the last two months of 2015, Android users launched Cardboard-friendly apps more than 25 million times. 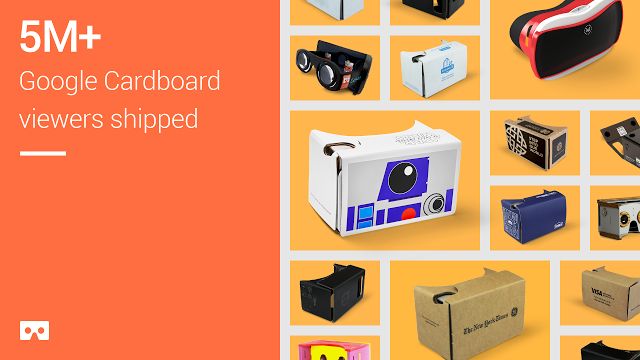 That might seem like a pretty small number when you consider that there are more than 1.4 billion people using Android devices around the globe. But VR technology is still in its infancy, and while we wait for high-quality (and high-priced) hardware from Oculus, Sony, HTC, and other companies, it’s impressive to see that Google’s idea for a DIY virtual reality device seems to be catching on.

Here are a few other stats the company is sharing:

I’ve used Cardboard viewers for a few games and interactive videos with my Nexus 5, as well as to watch some movies in a virtual theater. It’s a pretty nifty experience, although my kits aren’t really comfortable enough for extended viewing sessions… and the 1080p screen on my phone can look kind of like a screen door when you get that close to it. But I’m still impressed at just how little investment I had to make to try out some of these 360-degree experiences.

What about you? Have you tried Google Cardboard or another VR device?