Solar technology isn’t cheap, which is why it’s not all that surprising that Voltaic’s new Spark Tablet Case costs $299. On the one hand, that’s an awful lot of money to pay for an iPad case. On the other hand, it’s not really an unreasonable price for a device that generates 8 watts of solar power. It generates enough juice so that you can get one hour of video playback on an iPad by leaving the case out in the sun for one hour. 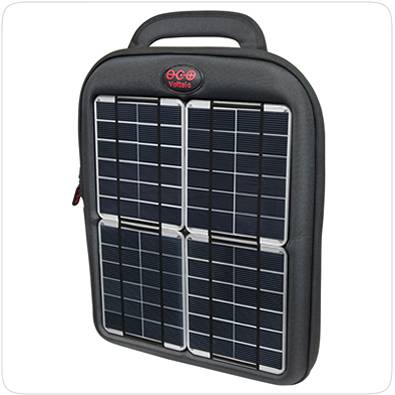 The Spark Tablet Case also has a built-in battery for storing reserve power. On a full charge, the battery has enough juice to fully charge your iPad. So even on a cloudy day you can use the case to extend the life of your tbalet battery.

The solar case can also charge phones, cameras, and other mobile devices. It has a mesh pocket on the inside for cables and adapters. The case itself is bade from recycled plastic soda bottles and it’s waterproof and UV resistant. It measures 13.5″ x 11″ x 2″ and weighs about 2.5 pounds thanks to the battery and solar panels.

This isn’t the sort of accessory that’s going to appeal to everyone. But if you like the idea of sticking the case in the window on a sunny day to charge the battery and using your iPad without drawing any power from the grid, or if you’re looking for a way to use your gadgets while hiking or camping, it could fit the bill.

It’s also interesting that the Spark Tablet Case runs $299, while you’ll soon be able to pick up a Samsung NC215S netbook with a built-in solar panel for $399. At nearly $400, the NC215S is pretty expensive by netbook standards. But it’s a heck of a lot cheaper than picking up a netbook and a separate solar charging device, although Voltaic does make a line of solar backpacks and laptop cases.