Tiny, low-powered PCs with ARM-based processors like the MK802 or Tronsmart Vega S89 usually ship with Android software that lets you stream videos, play games, or surf the web on a TV. But many of these little devices can also run other Linux-based operating systems such as Ubuntu, Debian, or Fedora.

Now the folks at VolksPC are working on a new system that lets you run both Android and Debian Linux at the same time, which allows you to run LibreOffice or other full desktop Linux apps as well as Android apps for Netflix, YouTube, and other features that might not work as well in Linux-on-ARM. 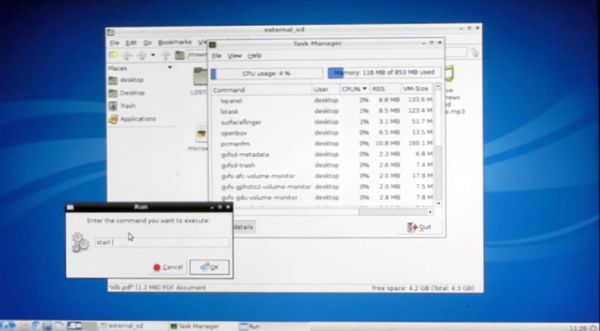 Eventually VolksPC plans to sell an ARM-powered mini PC with its software. It’s not yet available, but you can see their software working in a demo video which shows Android and Debian with the LXDE desktop environment running on the same system at the same time.

While both operating systems rely on the same kernel, they’re running independently of one another: You can shut down Android and keep running Debian or you can shut down Debian and just run Android. But in order to switch between Android and Debian apps, you’ll need to switch between desktop environments: you can’t have an Android app and a desktop Linux app on screen at the same time.