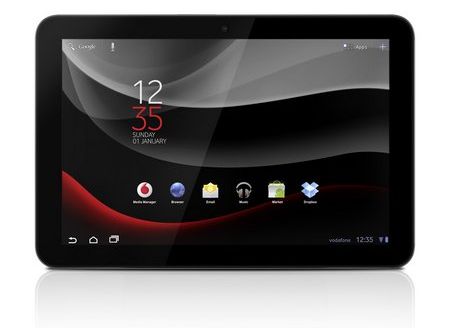 Plenty of wireless carriers are offering 3G or 4G versions of Android tablets from Samsung, Motorola, HTC, and other device makers. But Vodafone Germany is taking the unusual step of launching two new tablets under its own brand name.

The Vodafone Smart Tab will come in 7 and 10 inch versions, and both are set to hit the streets in November. Aside from the different screen sizes, the two tablets will have similar specs.

Both will feature 1.2 GHz Qualcomm Snapdragon dual core processors, 1GB of RAM, and Google Android 3.2 Honeycomb. Both will be available with 16GB of storage and microSD card slots for expansion. And both will feature HSDPA radios for download speeds up to 14.4 Mbps and uploads speeds up to 5.76 Mbps.

The two tables also both have 1280 x 800 pixel displays and dual cameras: a 5MP rear camera and 2MP front-facing camera.

The Smart Tab 7 measures 0.44 inches thick and weighs 0.84 pounds. Weight and dimensions aren’t yet available for the 10 inch model, but it will undoubtedly be heavier, although not necessarily thicker.

All told, these devices actually look pretty good for tablets that don’t carry the name of their manufacturer. It’s not clear whether they’ll be built exclusively for Vodafone by a Taiwanese or Chinese ODM or if we’ll see other nearly identical devices sold under different names. Ther’es no word on the pricing yet, and no information about whether these tablets will be available from Vodafone in other countries in addition to Germany.