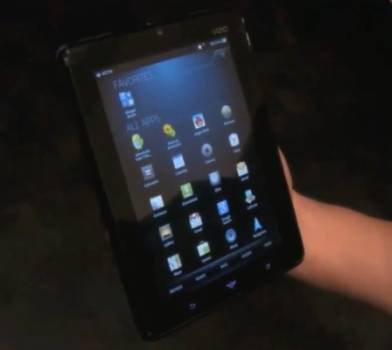 Vizio hasn’t announced a release date or final pricing for the company’s upcoming VIA Tablet yet. But apparently that doesn’t matter if you’re a big name sports star. NBA Rookie of the Year Blake Griffin got Vizio to hook up his home with a 65″ 3D TV and they threw in a VIA Tablet while they were at it. You can check out the video after the break.

The tablet is designed to work with a Vizio TV and/or phone, so you can start running an app on one device and pick up where you left off on the next. For instance, you can start watching a YouTube video on the tablet and send it to the TV which is outfitted with Google TV software. The tablet also features a remote control for the TV.

The tablet has a 1 GHz processor, 802.11n WiFi, Bluetooth and GPS. It features an 8 inch display, a front-facing camera, and HDMI output.

The tablet is expected to launch this summer. Last week it showed up at the FCC web site, and Engadget posted a picture of a Walmart inventory screen showing a $349 price tag for the Vizio tablet.

One reply on “Vizio VIA tablet shows up in the wild, coming soon to a Walmart near you?”