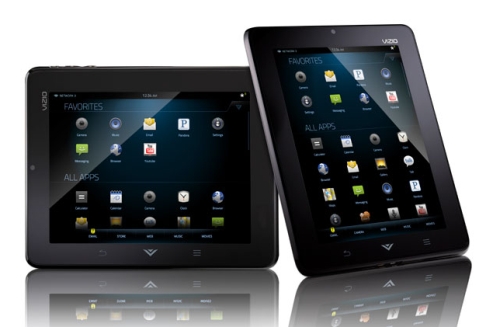 Hot on the heels of the surprise debut of a new Vizio tablet during a Rose Bowl commercial, Vizio has made the tablet official — as well as several other upcoming devices including an Android powered smartphone and a line of HDTVs and Blu-ray players with Google TV software.

The Vizio VIA Tablet has an 8 inch display, capacitive touchscreen and a 1GHz processor. It supports 802.11b/g/n WiFi, Bluetooth and GPS. There’s a microSD card slot for expansion, a font-facing camera for shooting video (or chatting), and HDMI output.

Vizio is positioning the tablet as a media device, with an unusual three-speaker design that lets you listen to stereo audio whether you hold the VIA Tablet in portrait or landscape mode. There’s also a built-in IR blaster and universal remote control app that lets you control a TV or home theater setup with the tablet.

Vizio’s VIA Phone feautres similar specs including a 1GHz CPU,  WiFi, Bluetooth, GPS, and HDMI output, plus front and rear-facing cameras. The phone has a 4 inch capacitive display and IR blaster, but there’s no mention of the speaker setup.

Vizio will showcase the new phone and tablet during CES next week, but there’s no word on launch dates or prices yet.