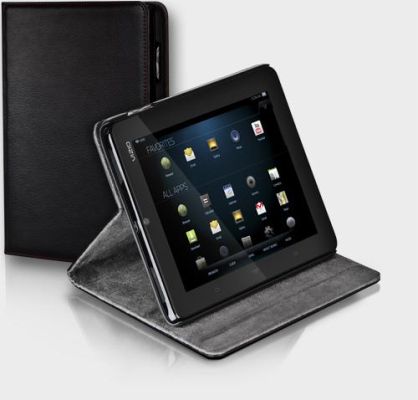 Vizio has begun taking pre-orders for its new 8 inch Android tablet. You can order the tablet today for $379.99 or spend an extra $20 to get a bundled 16GB SD card and a case which doubles as a tablet stand.

Orders are expected to ship on July 18th, and a week later on July 25th the tablet will show up in retail stores.

Vizio’s tablet is a bit different from most of the Android tablets on the market today. It has an 8 inch, 1024 x 768 pixel display and runs Google Android 2.3 Gingerbread. It supports basic Android features such as web surfing, video chatting with a front-facing webcam, or running thousands of Android apps. But it doesn’t run the version of Android which Google designed specifically for tablets.

Instead, Vizio envisions its tablet as a companion to a Vizio TV running Google TV software. You’ll be able to use the tablet as a big, expensive remote control for the TV and send apps or media running on the device directly to a supported TV.

The tablet’s home screen has been tweaked so that instead of displaying a typical Android home screen, the default view shows a list of favorite apps and all apps. You can also get to something that looks more like a home screen which displays widgets, but there’s no home button.

You can check out my hands-on video with the tablet after the break.