Vizio is launching a new line of smart audio devices that are basically Android boomboxes with a touchscreen display where you used to find the cassette deck.

You can also use the Vizio Portable Smart Audio systems as portable Bluetooth speakers for your phone, tablet, or other device — but what sets these little guys apart from most Bluetooth speakers is the built-in support for Android apps. That lets you use the portable speakers as standalone devices for streaming music from Pandora, videos from YouTube, or handling just about anything else you could do with an Android phone or tablet. 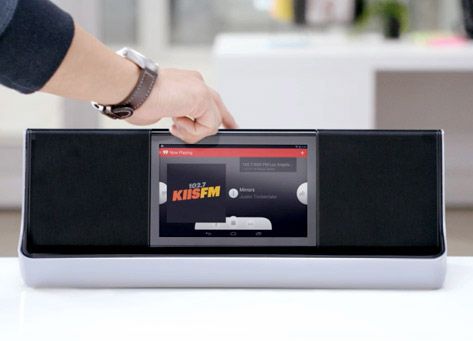 The portable speakers have built-in batteries which let you use them at home or on the go, but portable is a relative term. There are two models, but even the smallest measures 11 inches long and weighs 3.6 pounds. That model has a 4.7 inch touchscreen display, bass frequencies as low as 80 Hz, and sound levels up to 95 dB.

Vizio also offers a model with a 7 inch screen that weighs 8.8 pounds, measures 17 inches long, supports bass as low as 60 Hz and sound as loud as 101 dB. The larger model also has a built-in handle to make it easy to carry.