The Vizo Co-Star LT is an $80 box that you can plug into your TV to stream movies, TV shows, music and other internet content to your TV. It supports dozens of apps including Netflix, Hulu Plus, Amazon Instant VIdeo, YouTube, Vudu, and iHeart Radio.

In other words it’s a lot like the original Vizio Co-Star, which is still available for $100. The difference is the Co-Star runs Google TV software, while the Co-Star LT is powered by a platform called Vizio Internet Apps Plus. 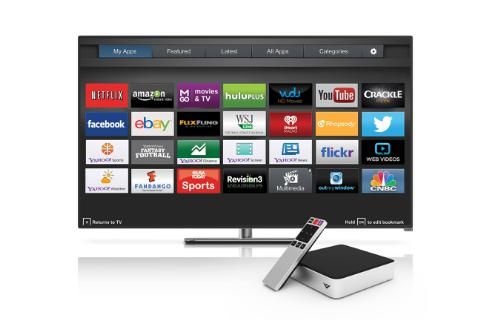 The new box supports 720p and 1080p HD video and 3D content, features HDMI input and output, a USB port, and support for 802.11n WiFi connections. It comes with a remote control, and you can also use a smartphone or tablet to find and control content on your TV.

In addition to internet media streaming, you can run HTML5 apps including Facebook.

All told, the new Vizio Co-Star LT seems to offer many of the same features as the company’s original Co-Star box, but without the Google TV software. While that means it’s probably a bit less versatile, it also looks simpler to use — or at least the remote control has far fewer buttons.