Chinese phone maker Vivo may not be a household name in the West. But the company was one of the top 5 smartphone makers in terms of shipment volume for a little while last year. And Vivo has a habit of unveiling devices with bleeding-edge features before they become more widely available on competitor’s devices.

The latest innovation? Vivo may have the first phone with an optical fingerprint sensor beneath the screen, allowing you to login to your phone or unlock apps and features simply by placing your finger on the screen itself. 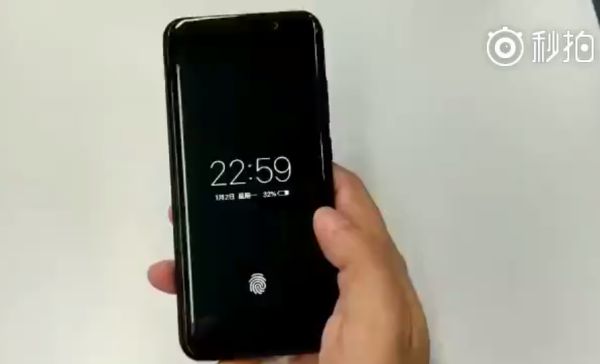 Vivo hasn’t made an official announcement yet, but a short video posted to Chinese social media site Weibo shows what appears to be a Vivo smartphone that can be unlocked by touching a specific part of the display.

Rumor has it that this is a feature Samsung, Apple, and other companies plan to add to future smartphones, since it would remove the need for a separate home button/fingerprint sensor on the front of a phone with a high screen-to-body ratio and provide an alternative to placing a sensor on the back of the phone.

If it seems odd that Vivo would beat bigger plays in the smartphone space to market with this feature, you clearly haven’t been paying attention to Vivo’s announcements over the past few years.

The company was one of the first to:

So is Vivo working on the first phone with an optical fingerprint sensor built into the screen? Maybe. It’s best to take leaks like this with a grain of salt. But if this video is the real deal, it wouldn’t be surprising at all to see Vivo offer one of the first devices featuring this technology.