When the Vivo NEX launched last year, it was one of the first smartphones to feature a pop-out camera, an in-display fingerprint sensor, and basically nothing but screen and some super-slim bezels on the front.

The upcoming Vivo NEX 3 takes the screen-to-body ratio to another level by sporting a curved glass display that wraps around the sides of the phone — the left and right sides are basically half screen, half phone.

While Samsung has been using curved displays to increase the screen size of its phones for years, the Vivo NEX 3 display extends further than the screens on any Samsung phone to date.

Vivo hasn’t officially launched the new phone yet, but the company sent a demo unit to YouTuber Mrwhosetheboss, who has posted a video giving us a pretty good look at the first phone with a so-called “waterfall display.” 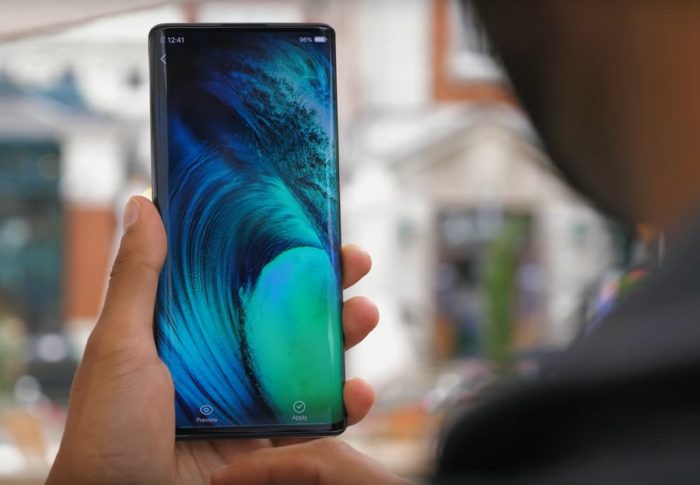 While he doesn’t share any specs for the phone yet, aside from the fact that it supports 5G connectivity, the video does emphasize just how much this phone appears to be nearly all-screen on the front.

Games, videos, and photos extend from edge to edge of the display (and a little over the sides of the display, quite honestly. And to demonstrate what it’s like to snap photos using a phone with no bezels, Mrwhosetheboss visits some popular tourist spots in London and captures images in a way that allows the picture on the phone to blend in with the real-world scenery almost seamlessly (once you get over the color differences).

He also points out that the phone has nearly seamless sides — because there are no physical power or volume buttons on the left or right side of the phone. Instead there are capacitive buttons with haptic feedback that you can press to adjust the volume, and a power button on top of the phone.

The phone has two mics, no headphone jack, and a USB-C port. And that’s about all we know so far — it appears that Vivo isn’t ready to announce the processor, memory, storage, or camera specs just yet.