Chinese phone maker Vivo’s latest phone is features a 6 inch display with an 18:9 (2:1) aspect ratio and slim bezels, which seems pretty much par for the course for premium phones in 2017. But the Vivo V7+ is launching this month in India with a list price of 21,990 rupees, which is less than $350. Bezel-less design and “fullview” displays aren’t just for premium phones anymore. 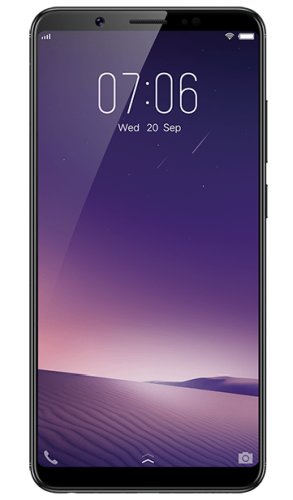 Vivo did cut a few corners. The phone has a plastic body and the display has a resolution of 1440 x 720, which falls far short of the 2880 x 1440 pixel displays on phones like the LG G6 and V30. And while modern flagship phones tend to ship with Qualcomm’s Snapdragon 835 processor or something roughly equivalent, the Vivo V7+ has a Snapdragon 450 chips.

But the big screen and slim bezels aren’t the phone’s only selling points. It also has 4GB of RAM and 64GB of storage, a 3,225 mAH battery, and 16MP rear camera with phase detection autofocus.

On the front of the phone is a 24MP camera with LED flash for taking well-lit, high-res selfies. The phone also features a fingerprint sensor on the back and an AK4376A Hi-Fi chipset.

The Vivo V7+ has two SIM card slots and a microSD card slot.

It ships with Android 7.1 and Vivo’s “Funtouch OS 3.2” user interface that has a few special features including an “app clone” option that lets you run two instances of the same app so you can do things like login a social media or chat app using two different accounts simultaneously.

The Vivo V7+ goes up for pre-order in India today and it should be available starting September 15th.

via GizmoChina and Gizbot