Vivo has made a habit of showing off its Apex line of concept phones at Mobile World Congress for the past few years. But this year MWC was cancelled… but that didn’t stop Vivo from taking out ads in Barcelona where the show would have taken place.

So we have an idea of what this year’s Vivo Apex looks like… although whether it’ll make an official appearance next week remains to be seen. 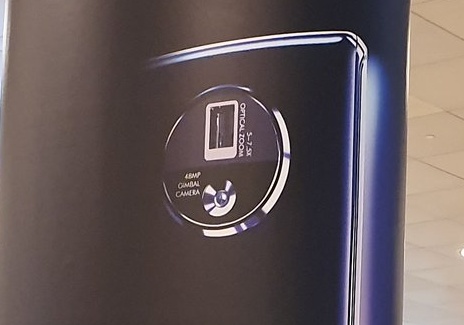 Some journalists and tech industry folks are still arriving in Barcelona for meetings and ancillary press events that haven’t been cancelled. So people like David Ruddock and Yasuhiro Yamane have spotted ads at the airport for the 2020 version of the Vivo Apex.

While detailed specs aren’t available, some key details are written on the body of the phone, making it clear that it’s a 4G device with a 48MP camera with 5X to 7.5x optical zoom support.

It also has a some sort of “Gimbal” mechanism, which means it’ll have some sort of “pivoted support that allows the rotation of an object about a single axis,” for smoother camera stabilization.

That’s in keeping with a leak posted to Twitter by Ben Geskin earlier this month.

Does this mean that you’ll actually be able to buy a phone with a gimbal this year? Maybe… maybe not.

The original Vivo Apex debuted at MWC 2018 and it was the first smartphone to feature a pop-up selfie camera. A few months later that technology came to market in the first-gen Vivo Nex smartphone.

But in 2019 Vivo showed off an Apex concept phone with no physical ports or buttons. Instead it used a magnetic charger and capacitive touch buttons. So far that’s a design no phone maker has tried to use in a commercial device.