The Vivaldi tablet is a 7 inch tablet and open source KDE Plasma Active software. The €200 tablet is expected to start shipping in May, but the folks behind the official Vivaldi user forum at OpenTablets.org got their hands on an early unit — and they’ve ripped it apart to see what makes it tick. 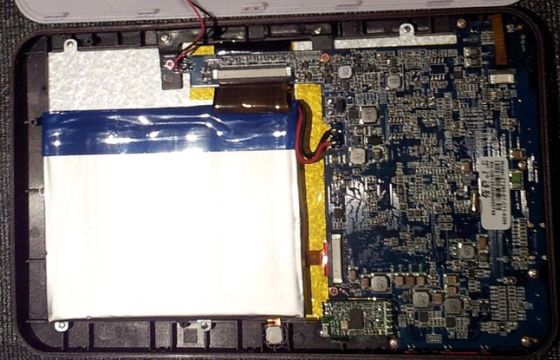 There aren’t any major surprises. After all, the tablet (formerly known as the Spark) is designed to be a free and open source device with an unlocked bootloader and user customizeable software.

We already know that the hardware is basically a Zenithink C71 tablet with a 1 GHz AMLogic ARM Cortex-A9 processor, Mali 400 graphics, 512MB of RAM, 4GB of storage, an 800 x 480 pixel display, 2 USB ports, an HDMI port, and a front-facing camera.

OpenTablets reports the device is fairly easy to disassemble. There are just four screws and a few plastic tabs holding the case together.

The good news is there’s some extra space which could allow a larger battery or other user modifications. I wonder if it also might be possible to add a higher resolution display. Unfortunately RAM upgrades are pretty unlikely, since the memory is attached to the system board.

You can find more photos of the tablet’s insides at OpenTablets.org.

Meanwhile, developer Aaron Seigo, the public face of the Vivaldi project, says that with the latest software images he’s getting around 7 hours of battery life from the Vivaldi’s 13.5 Whr battery. He says the group has also selected the hardware that will be used for an upcoming 10 inch tablet featuring KDE Plasma Active software — but he’s not sharing any more details than that yet.