Vivaldi is a web browser designed for folks who want to be able to customize the heck out of the tools they use to surf the web. The first version of Vivaldi for desktop computers was released in 2015, but the first public beta of Vivaldi Mobile for Android was released just last year.

Now Vivaldi Mobile is leaving beta — the first stable version of the company’s Android browser is out today. 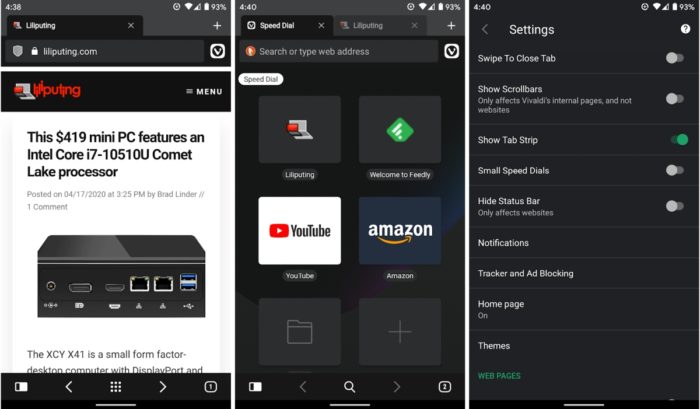 Both the desktop and mobile versions of the browsers include built-in tracker and ad blockers. They’re disabled by default, but they’re easy to enable with a few taps in the Settings menu — I should also point out that you can manage your blocking preferences on a per-page basis if you want to whitelist specific sites to help support independent web publishers (hint hint).

The Android version of Vivalid supports browser tabs, a Speed Dial on the new tab page for easy access to shortcuts, optional support for synchronizing your data between desktop and mobile, support for private browsing, support for full-page screenshots, support for forcing all web pages to load in desktop view, and more.

Vivaldi’s new desktop release includes the same new tracker protection feature as Vivaldi Mobile, plus some other new features including navigation improvements and a new customizable clock in the navigation bar.

You can read more about new features in Vivaldi 3.0 for desktop and Vivaldi Mobile in the company’s official announcement.