The Vivaldi tablet is a project from the KDE development team aimed at introducing a tablet with open source Linux-based software with the KDE Plasma Active user interface.

But the project has run into some speed bumps, and now the team is looking for new hardware partners. 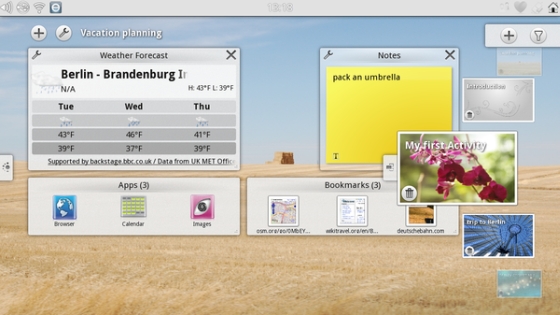 Developer Aaron Seigo first introduced the project in January, and took time to discuss the benefits of an open source tablet with Liliputing in February.

Since then, the team released some early builds of the operating system, changed the name from Spark to Vivaldi, and launched a Partner Network (which is sort of like an app store for much more than apps).

But the tablet hasn’t gone on sale yet.

Today Seigo has explained the reason for the delay. Basically, the group had been working with an Asian hardware maker which hadn’t released all the source code needed. Then the manufacturer changed hardware designs, making things even worse.

Now the KDE team is evaluating hardware from a different manufacturer. No decisions have been set in stone, but now it’s highly unlikely that the Vivaldi tablet will be a modified version of the 7 inch Zenithink C71 tablet if and when it hits the streets.

Despite the setbacks, Seigo still seems cautiously optimistic, suggesting that there’s still plenty of space in the tablet market for another entry — and that nobody else is building anything that’s completely open in the way that the Vivaldi tablet would be.

Seigo explained the problems working with the original manufacturer in a bit more detail during an event in July. You can read a summary at LWN.net.