The StarFive VisionFive 2 is a single-board computer with a quad-core RISC-V processor, an integrated GPU, an HDMI 2.0 port with support for 4K video and up to 8GB of RAM and up to two Gigabit Ethernet ports.

This summer StarFive ran a Kickstarter crowdfunding campaign for the VisionFive 2. Now that the campaign has ended, the single-board PC is starting to hit retail channels. It’s up for pre-order for $56 and up, and VisionFive 2 is expected to begin shipping to retail customers in December, 2022. 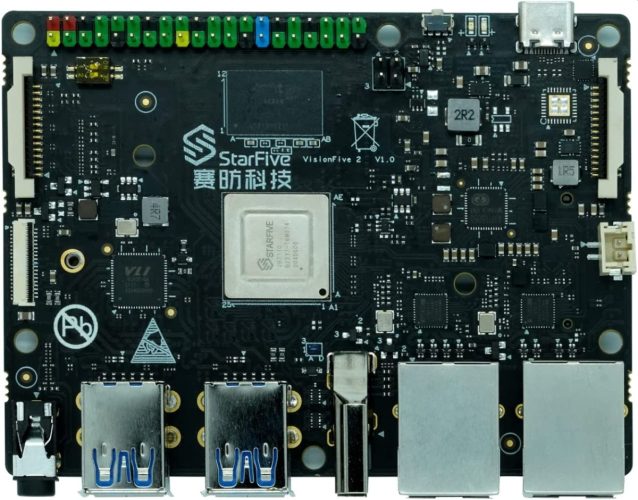 There are several different configurations of the VisionFive 2 available for pre-order. You can choose variants with 4GB of LPDDR4 memory or 8GB. And you can opt for a single Gigabit Ethernet port or dual Ethernet ports (one Gigabit + one 10/100).

Customers can also choose to place an order for a model with or without WiFi, but note that wireless connectivity comes courtesy of a dongle – there’s no built-in support for WiFi or Bluetooth on the board itself.

Here are some of the stores that are currently taking pre-orders:

All versions of the board are powered by a StarFive JH7110 processor, which features four SiFive U74 RISC-V processors cores at up to 1.5 GHz, an S7 monitor core, and an Imagination BXE-4-32 MC1 GPU with a base speed of 400 MHz but support for speeds up to 600 MHz.