VirtualBox is a free and open source virtualization utility that lets you run one operating system from within another. For example, you can create a virtual machine on a Windows computer and use it to install Linux Mint… or vice versa.

The software is developed by Oracle, which released version 5.0 earlier this month. There are a number of useful improvements, including support for USB 3.0 devices and improved CPU utilization.

But one of the things I find most helpful is support for dragging and dropping content between a guest and host operating system. 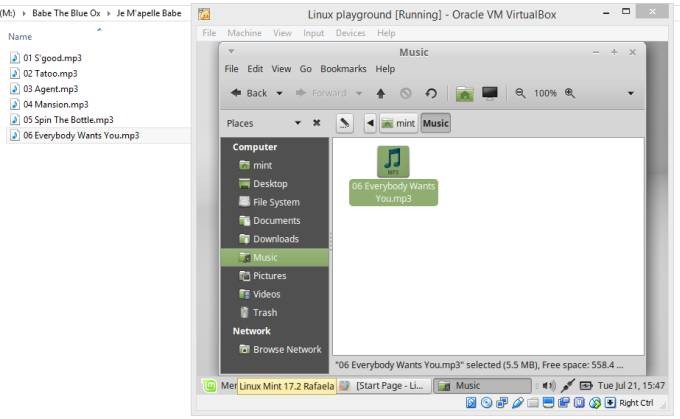 To test the new feature, I fired up VirtualBox 5.0, loaded Linux Mint 17 RC from a disk image, and then dragged a few files including text document and MP3 music files from my Windows PC to my virtual Linux Mint system.

Other new features in VirtualBox 5.0 include support for disk image encryption on virtual hard disk images, use of built-in virtualization support on operating systems that support it (including Windows 7 and later).

You can find more details in the changelog for VirtualBox 5.0.

One reply on “VirtualBox 5.0 lets you drag and drop files between host, guest OS”