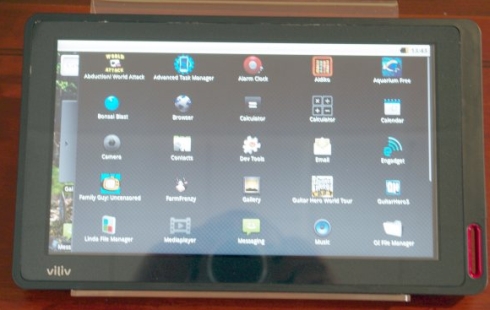 Viliv is launching a new 10 inch Android tablet that bucks the 1024 x 600 pixel trend with a high definition 1366 x 768 pixel capacitive touchscreen. That makes a lot of sense, and I’m surprised Viliv is the first company to do it.

I’m not really a huge fan of 10 inch, 1366 x 768 pixel displays on Windows netbooks, because they’re just too sharp. Reading web pages, icon text, and other elements gives me a headache. But the problem isn’t the display resolution per se, it’s how the operating system interacts with the screen. Basically, it treats a 10 inch, 1366 x 768 pixel screen as if it were a 15 inch display with the same resolution, and just shows you tiny text, icons, and other graphical elements.

Google Android, on the other hand, was designed for smartphones that have tiny displays, but which come with a variety of screen resolutions. I have a Google Nexus One, for instance, which crams an 800 x 480 pixel display into 3.7 inches.  That should give it a much higher DPI than most netbook screens, but because the graphics scale properly, it’s not painful to look a the screen. So I’m kind of excited to see someone develop a 10 inch tablet with a high resolution display and an operating system that can take advantage of it properly.

What that means is if you’re watching a 720p video on the Viliv X10, you’ll actually see every last pixel on the screen. The folks at Laptop Magazine took the X10 for a spin, and they say it also looked great with 3D gaming. The extra pixels probably come in handy when you’re surfing the web too — but the beauty of the Android browser is that it’s incredibly easy to zoom in and out if the text on the page is too sharp or too big.

The complete specs aren’t available yet, but Laptop Mag reports that the Viliv X10 has a USB port, HDMI output, SD card reader, and a front-facing camera. It supports WiFi, and 3G and WiMAX options should be available down the road. The battery shoul dbe good for up to 10 hours.

The demo unit is running Android 2.1, but Viliv plans to load the X10 with Android 2.2 before it starts shipping.

The company is also preparing a Windows 7 version of the X10 tablet which looks pretty much the same as the Android version on the outside.

You can more photos and a few short videos of the Viliv X10 at Laptop Magazine.