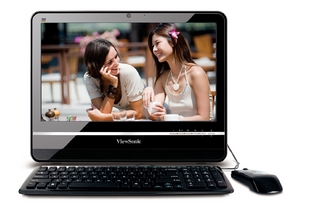 ViewSonic introduced three new computers this week, including a relatively inexpensive Windows 7 all-0in-one PC with a touchscreen display and two mini-PCs that are too powerful and expensive to really consider nettops. So I’m kind of ignoring the $750 VOT530 PC Mini and the $950 VOT550 for now and focusing instead on the upcoming $VPC101 all-in-one that should be available in December.

Like the ViewSonic VPC100 that I got a chance to check out a few weeks ago, the VPC101 features an 18.5 inch, 1366  768 pixel display. But the new model has a touchscreen and runs Windows 7 Home Premium which includes touch-friendly features.

The computer has a 1.6GHz Intel Atom 230 CPU, integrted GMA 950 graphics, 1GB of RAM and a 160GB hard drive. So it’s basically a netbook dressed up in a desktop’s clothing. But like a netbook it also has 802.11b/g WiFi, which I’m starting to think should be a standard feature in all desktop computers. After futzing with setting up a new router in my house last weekend, I realized that life would be a lot simpler if I didn’t need to connect any desktop PC in the house to the home network using an Ethernet cable. For now I’m using Powerline adapters, but I digress…