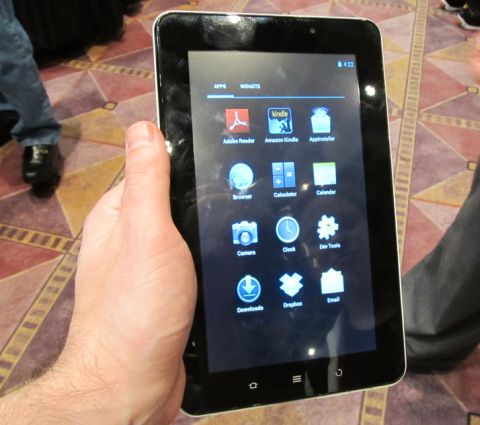 ViewSonic is introducing a new low-cost 7 inch tablet which will be available in the coming months for $169. What sets the ViewSonic ViewPad e70 apart from most other budget tablets though, is that it will ship with Google Android 4.0 Ice Cream Sandwich.

You won’t get any more than you pay for with the e70. The tablet has a low resolution 800 x 480 pixel display and an unidentified 1 GHz single core processor. But the device feels fairly responsive and has a capacitive touchscreen.

The ViewPad e70 has a microSD card slot, microHDMI port, and 4GB of storage. It will ship with the Amazon Appstore and Amazon Kindle app but without the official Google Android Market.

The tablet feels pretty comfortable to hold, but the low resolution display is a little disappointing.

ViewSonic doesn’t have the cheapest Android 4.0 tablet. That record is currently held by the Ainol Novo 7 tablet with a MIPS processor. But the ViewPad e70 will likely feature better support for third party apps thanks to its ARM-based processor.

Since Google doesn’t place as many restrictions on Android 4.0 tablets as it did on Android 3.2 Honeycomb devices, we’ll probably be seeing plenty of these low cost Ice Cream Sandwich tablets over the next year. But it’s nice to see a few that aren’t coming from Chinese companies you’ve never heard of before.

ViewSonic expected to ship the E70 during the first quarter of 2012.