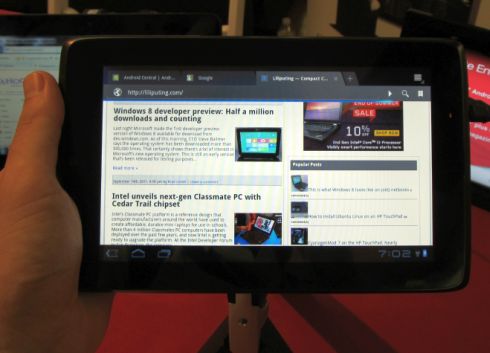 As you may have noticed, I stopped by a Pepcom show in New York City last night where I got a chance to check out some pretty cool gadgets including including 7 inch tablets such as the Acer Iconia Tab A100, Lenovo IdeaPad A1, and ViewSonic ViewPad 7e.

But I have to say, my favorite 7 inch tablet so far is the ViewSonic ViewPad 7x.

That’s not surprising, since it’s also the most expensive 7 inch tablet of the bunch. It’s expected to hit the streets in late October for $379. That’s still a heck of a lot cheaper than the HTC Flyer though, which is a 7 inch Android tablet that sells for $499.

The ViewSonic ViewPad 7x features a 1024 x 600 pixel capacitive multitouch display and runs Google Android 3.2 Honeycomb, along with the complete suite of Google apps including the Android Market. It has a 1 GHz NVIDIA Tegra 2 dual core processor, and an excellent display which offers crisp graphics and good viewing angles.

In my brief hands-on, I got the feeling that this tablet was snappier and more responsive than any of the $200 7 inch tablets I’d tested, and it offers better viewing angles and just feels a little nicer than Acer’s $329 Iconia Tab A100 — but having only spent a few minutes with each tablet, it’s a bit early to draw definitive conclusions. I haven’t tested battery life or other performance features yet, for instance.

The ViewPad 7x has a 5MP rear camera and a 2MP front camera, supports HDMI and DLNA video connections, and features SRS audio.

The tablet weighs about 0.84 pounds.