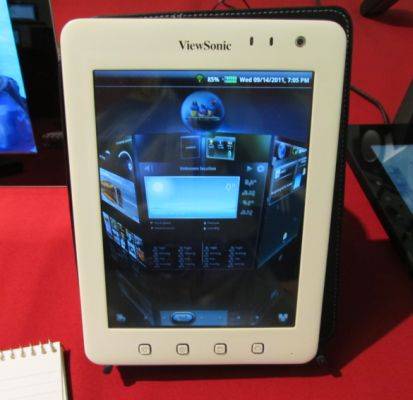 The ViewSonic ViewPad 7e is an Andorid tablet featuring a 7 inch, 800 x 600 pixel display and a 1 GHz processor. When I got a chance to check out the tablet last month a ViewSonic rep told me it would go on sale in October… but as Halloween approaches, ViewSonic is running out of time to meet that deadline.

Today the company put out a press release confirming that the ViewPad 7e is expected to hit the streets in North America by the end of October. It’s also expected to hit Latin America in November.

In the US, the tablet will sell for $199.99… or about the same price as the Amazon Kindle Fire. In fact, like the Kindle Fire, the ViewPad 7e will ship with the Amazon Appstore for Android and Amazon Kindle eBook reader. It will not come with the Google Android Market preloaded.

But while the Kindle Fire is being positioned as a device for reading Amazon books, watching Amazon movies, and listening to Amazon music, the VewPad 7e is more of an all-purpose Android tablet. The tablet runs Google Android 2.3 Gingerbread and includes the SPB Shell 3D application launcher and Swype keyboard app.

Unlike the Kindle Fire, ViewSonic’s tablet has front and rear cameras for snapping photos, shooting videos, or making video calls.

There’s also an HDMI port for connecting the tablet to an external display. The ViewPad 7e has 4GB of storage and an microSD card slot for expansion. It has 802.11b/g/n WiFi.

One reply on “ViewSonic ViewPad 7e shipping this month for $200”