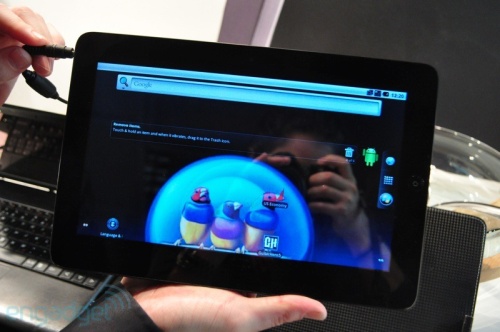 ViewSonic is showing off a new 10 inch tablet at Mobile World Congress.. The ViewSonic ViewPad 10pro will come in two versions: One that runs Windows, and another that runs both Windows 7 and Google Android 2.2.

The tablet has a 10.1 inch, 1024 x 600 pixel capacitive multitouch display and an Intel Atom Oak Trail processor. It supports up to 2GB of RAM and up to 32GB of storage and has HDMI and USB ports as well as a 1.3MP front-facing camera.

Engadget spotted the tablet today and reports that the viewing angles and build quality are mediocre, but that the killer feature on the Windows/Android version is that you don’t actually have to reboot to switch between operating system, since Android runs in virtualization. While I’ve often wondered why you’d really want a dual boot tablet, since you’re probably not going to reboot that often, the virtualization idea makes a lot of sense, since it grants you the ability to run thousands of touch-friendly Android apps on a Windows tablet without waiting 60 seconds or longer for your machine to shut down and start up again.

On the other hand, the tablet doesn’t come with Android Market access, which means you may have to hunt a little bit to find third party Android apps for the ViewPad 10pro. Hopefully Android 3.0, which is built for tablets, will be available in the future.

You can check out videos from Engadget and Netbook News after the break.