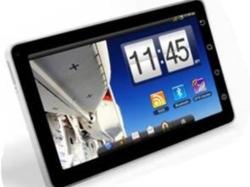 Can’t decide whether you want your tablet computer to run Windows 7 or Google Android? It looks like ViewSonic may have you covered. According to TechRadar, the company is planning to launch a 10 inch slate PC with an Intel-based chipset that will be able to dual boot Windows and Android.

ViewSonic is also reprotedly working on a 7 inch Android tablet with 3G, WiFi, an accelerometer, USB port, Bluetooth, and assisted GPS. But that’s pretty much par for the course these days.

While a dual boot tablet will definitely stand out from the crowd, I kind of wonder who ViewSonic thinks the target audience for this sort of device is. I imagine there are plenty of people dying to get their hands on a high quality Android tablet capable of long battery life, a good web browsing experience, and the ability to run Android apps — but I have no idea if they’re the same people who really want a Windows tablet that can do many of the same things plus run native Windows applications (albeit, with a UI that was designed for a keyboard and mouse and most likely poorer battery performance).

What do you think? Is dual boot the way to go, or would you rather have a tablet that runs one operating system and runs it well?