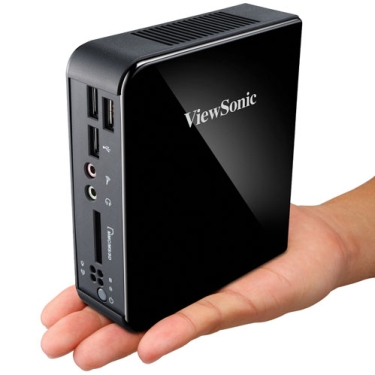 Is a nettop still a nettop if it’s small, light, and has a low power processor that’s not an Intel Atom or VIA C7/Nano chip? I’m going to go out on a limb and say yes, as long as it’s reasonably priced — and that puts the new ViewSonic VOT125 right on the border. On the one hand, it looks like virtually every other nettop that’s been put out in the last two years. On the other hand, it has a beefier processor and higher price tag — making it a bit more like the compact desktop computers of yesteryear.

The computer can handle a number of recent Intel CULV chips, including:

All four versions are bundled with Intel GMA4500MHD graphics.

The only catch is the price, with the cheapest model running $499 with a single core Celeron processor and the priciest model with the Core 2 Duo processor going for $679. Still, if you’re looking for a tiny computer with a bit more oomph than your typical netbook, the VOT125 certainly fits the bill.