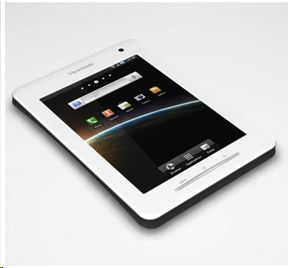 As HP inadvertently showed recently, if you give a tablet an irresistible price tag, shoppers won’t resist a bargain. Well, maybe. After all, while the HP TouchPad was certainly a steal at $99, there have been low-priced tablets on the market for months… most just aren’t from big-name brands and they don’t have the build quality or feature set found in more expensive tablets.

Now ViewSonic is hoping to get into the cheap tablet space with a new model called the ViewPad 7e. It has 7 inch display with a 4:3 aspect ratio, Bluetooth, HDMI, and WiFi. The company is pitching it as a device for reading eBooks, surfing the web, or viewing multimedia, and it will come with Amazon Kindle software preloaded. It will also run Google Android 2.3 Gingerbread.

There’s no information available yet about the screen resolution, touch panel technology, or processor. We’ll probably know more once the IFA trade show starts next week.

The tablet is expected to launch during the fourth quarter for €169, which is about $240 US — although I would’t be surprised if it’s a little cheaper in the States, as most electronics are. That’s not exactly HP TouchPad cheap, but it’s not a bad price from a company that knows their way around Android tablets.