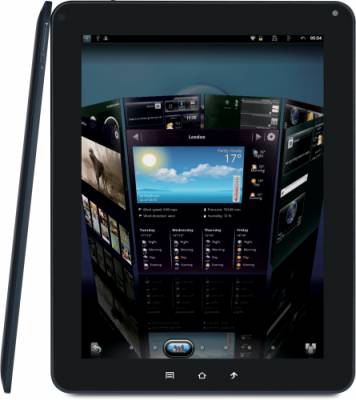 ViewSonic is adding yet another Android tablet to its lineup. This time we’re looking at a budget 10 inch tablet called the ViewPad 10e. It’s basically a larger version of the ViewPad 7e which was introduced earlier this summer.

Like its smaller sibling, the ViewPad 10e features a 1 GHz ARM Cortex-A8 processor and Google Android 2.3 Gingerbread processor. But it has a larger 9.7 inch, 1024 x 768 pixel IPS display.

The new tablet has 512MB of RAM and 4GB of storage, plus a microSD card slot. It has a 1.3 MP front-facing camera, support for 720p HD video playback, and 802.11b/g/n WiFi and Bluetooth 3.0 wireless connectivity.

There’s also a mini HDMI port, a micro USB port, and an audio jack along the sides of the tablet, allowing you to transfer files or pump out audio or video to an external display.

Pocket Lint reports that the tablet has a 5400 mAh battery, measures 9.5″ x 7.4″  x 0.36″ and weighs 1.4 pounds. The tablet doesn’t include the Andorid Market or Google suite of apps, but it does appear to come with the SPB Mobile Shell application launcher, just like the smaller ViewPad 7e. It should also support the Amazon Appstore or other third party Android app stores.