It’s not hard to find Windows 8.1 tablets that sell for $100 or less these days. But that doesn’t mean there’s not still room for improvement.

Most of the sub-$100 Windows tablets available in the US (such as the WinBook TW800, Vulcan Challenger II, and Toshiba Encore Mini) feature just 1GB of RAM and 16GB of storage. But Chinese device maker Vido’s latest tablet sports 2GB of memory and 32GB of storage and still manages to maintain a list price of 599 yuan, or about $97. 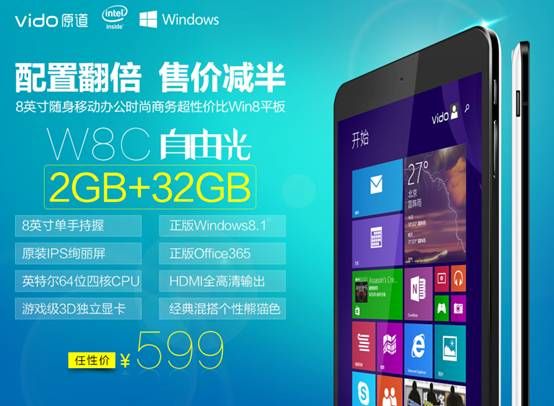 It also has HDMI output, 2MP front and rear cameras, and it comes with a 1-year subscription to Microsoft Office 365.

The tablet measures 0.36 inches thick and weighs about 10 ounces.

Vido’s tablets aren’t typically sold in US stores, but don’t be surprised if you see this model at AliExpress or other international retail channels soon. If we’re lucky the tablet and others like it could also put pressure on the competition which could either push 1GB/16GB tablets out of the market or at least drive their prices down even lower.

Of course if you don’t want to wait that long, there’s always the HP Stream 7. It’s a 7 inch Windows tablet with $100 price tag, a Bay Trail processor, and 32GB of storage. But it only has 1GB of RAM.