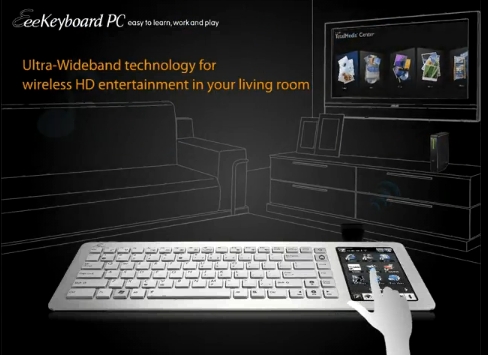 Asus has been teasing us with a computer-in-a-keyboard called the Eee Keyboard since early last year. The computer has yet to make it to market, but Asus did put out a short promotional video this week that shows just what you would do with a device like the Eee Keyboard.

Basically, the Eee Keyboard is a home entertainment computer. It doesn’t have a powerful processor or graphics for playing hardcore video games or transcoding video. Instead, it features netbook-like specs that are good enough for surfing the web and performing other light weight tasks, including watching web video or streaming local video over a home network.

The Eee Keyboard connects to a TV or monitor over a wireless HDMI connection, which makes it easy to sit on a couch or bed and watch YouTube on your TV set. The keyboard also has a built in touchscreen LCD, but it’s not large enough to function as a primary display. Instead, it’s a secondary display that you can use to launch applications and load widgets such as a weather app.

Asus has said that the Eee Keyboard should be available soon… and the release of this video shows that the company is at least getting ready to start marketing the unusual device. But there’s still no word on retail availability.