The last Amazon Kindle eReader to feature a headphone jack and speaker that worked with Amazon’s text-to-speech software was the 2011-era Kindle Touch.

But if you have a recent Kindle, you can still have it read text-only books aloud to you. It just takes a little extra hardware… and a bit more patience.

Amazon sells a $20 Kindle Audio Adapter which you can plug into a 7th-gen Kindle Paperwhite to add a headphone jack. Once you do that, the Kindle will automatically turn on an accessibility feature called VoiceView which speaks everything on the screen aloud.

As I mentioned last year, you can also build your own Kindle Audio adapter from a few cheap parts, but now that I’ve actually tested it out, I’m not sure I’d really recommend doing that unless you have those pieces already lying around. 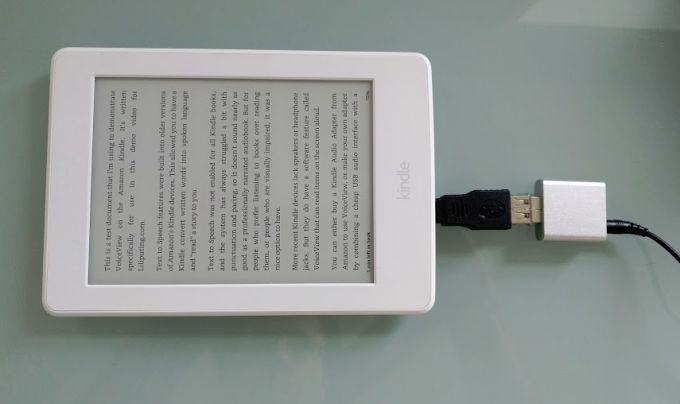 I already has a cheap USB audio adapter and a cheap micro USB to USB-A adapter lying around, so that’s what I decided to use for this test. The good news is that this gear cost about $10.

The less good news is that my homemade adapter had a habit of coming unplugged, causing VoiceView to stop working until I jiggled the adapter.

So if you really want a decent Kindle Audio Adapter, you should probably consider just buying the one Amazon sells.

Or you could just buy Amazon’s cheaper $79 Kindle. It doesn’t have the same illuminated, high-res display as the $120 Kindle Paperwhite, but it does support VoiceView when you connect Bluetooth headphones.

Anyway, it’s important to remember that VoiceView isn’t quite the same as the old text-to-speech feature. Instead, VoiceView is designed for visually impaired users. Once it’s enabled, it will read everything on your Kindle aloud to you, including settings and other menu items.

It actually makes navigating through Kindle menus more difficult. So if you don’t need the accessibility features and just want to listen to audiobooks, I’d recommend first loading up the book you want to listen to and then plugging in the adapter so it will start reading. If VoiceView is running but doesn’t start reading a book right away, try swiping down on the screen quickly with two fingers placed close together.

Overall, the audio quality on my 2016 Kindle Paperwhite is actually much nicer than on my old 2011 Kindle Touch. It just takes a bit more work to enable the feature. 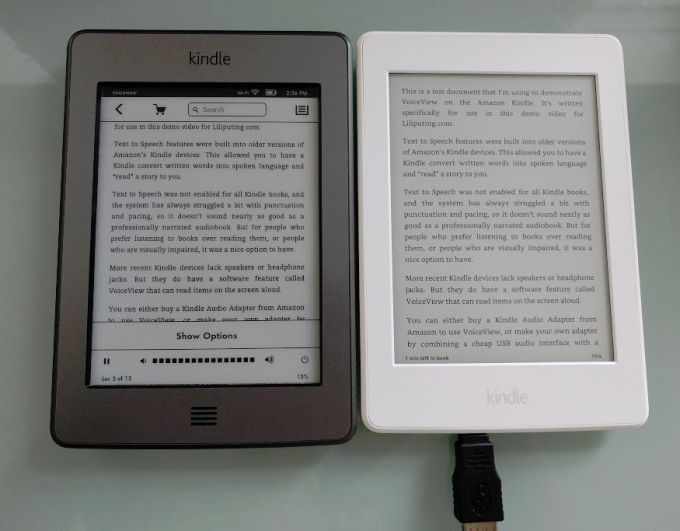 Another thing to keep in mind is that text-to-speech software doesn’t do a great job with pacing, phrasing, pronunciation of uncommon words or names, or any of the other things that voice actors get paid for when they do professionally narrated audiobooks.

If you want a truly engaging experience, it’s worth looking for an audiobook version of a title. But if you can’t afford that or if there isn’t a professionally narrated version available, it’s nice to have another option.

There are other ways to use text to speech with eBooks. If you have DRM-free books and an Android phone, for example, you can use something like the @Voice Aloud Reader app or FBReader for Android with a TTS plugin. Moon+ Reader for Android also supports text-to-speech, and unlike the Kindle Paperwhite, it can read PDF files aloud.

But if you have your heart set on doing it with a Kindle, VoiceView is the way to go if you have a recent model.

Oh, and while I still don’t necessarily recommend building your own adapter unless you already have the required parts, here’s what you need:

3 replies on “Video: Make your own Kindle Audio Adapter for text-to-speech (or buy one for $20)”