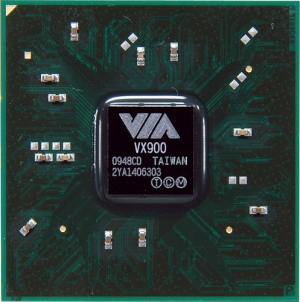 The other day we got a first look at VIA’s new VX900 graphics processor. Now VIA has officially introduced the new product, which can be coupled with a VIA  low power CPU to provide HD Flash and desktop video playback.

The VX900 MSP supports DDR3 memory with speeds up to 1066MHz. And while VIA has been showing the media processor off with a Nano processor, it’s also compatible with VIA C7 and VIA Eden chips.

In addition to the ChromationHD 2.0 support, the VX900 uses Chrome9 3D graphics with DirectX 9.0 support, but no DirectX 10. In other words, the purpose of this chipset is to enable HD video playback and some 3D effects. But don’t expect netbooks and nettops with the VX900 chip to be serious gaming machines.