VIA Technologies isn’t exactly a household name, but the Taiwanese company is the third largest maker of x86 processors for notebook, desktop, and server computers. But it’s a distant third place, with VIA capturing just about 0.1 percent of the market in the last quarter of 2011. 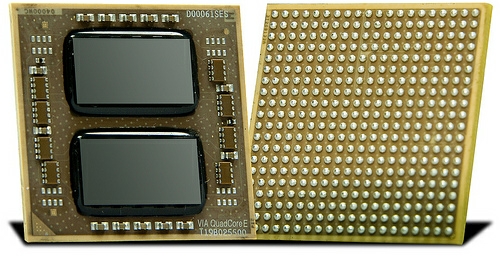 Researchers at IDC have released their latest report on microprocessor revenues, and in the fourth quarter of 2011 Intel had 80.3% market share while AMD capture 19.6%.

A few years ago VIA had a few minutes in the spotlight when the company’s low power chips were selected by a handful of netbook and notebook makers including Lenovo and Samsung.

But right now there aren’t any big name PCs available in the US or Europe with a VIA chip. Instead the company moves most of its x86 processors in Asia.

In fact, for the first time since I started attending the annual Consumer Electronics Show in Vegas four years ago, VIA didn’t have any noticeable presence at the show at all this year.

That doesn’t mean VIA is going out of business anytime soon. The company continues to show off new products including a new computer-on-module and a new  low power quad-core mini-ITX board.

VIA also makes ARM-based processors which show up in some phones and tablets, and VIA sold its S3 Graphics division to HTC last year, pocketing about $300 million in the deal.

One reply on “VIA ships fewer x86 processors in 2011, holds onto distant 3rd place”