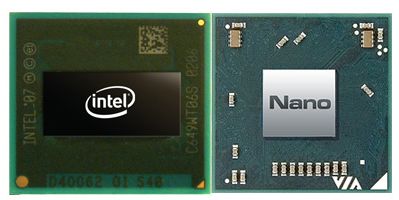 The Intel Atom processor has become the defacto standard for netbooks in the developed world. Acer, Asus, Dell, HP, Lenovo, MSI, Toshiba, and other computer makers are all equipping mini-laptops with the low power CPU. But it’s not the only game in town. VIA’s Nano processor also uses less power than most traditional laptop processors, but provides better performance in many areas than the Intel Atom.

Right now the VIA Nano CPU is only being used in a handful of Chinese devices and the Samsung NC20 12 inch laptop.

But the folks at ZDNet UK decided to see how the Nano stacks up against the Atom. There’s just one problem: They compared the desktop version sof each processor, so it’s hard to say what kind of performance you’d get if you were using the chips in two similarly specced netbooks. For instance, the Nano chip used in the test has a 1.8GHz clock speed, while the Samsung NC20 tops out at 1.3GHz.

That said, the article does make for an interesting read. In general, ZDNet found what you would expect: The Atom uses less power, and should therefore give you better battery life. But the Nano scored better on most tests measuring CPU and graphics performance. And neither chip is great for serious computing tasks like encrypting data or encoding media files.