Chip maker VIA has unveiled a new version of its Nano X2 processor called the VIA Nano X2 E-Series. It’s a dual core 64-bit chip designed for embedded systems. In other words, you probably won’t find the E-Series in a netbook or tablet anytime soon, but it could be used in televisions, set-top-boxes, point-of-sales systems (ie: fancy cash registers),  or other commercial or business environments. 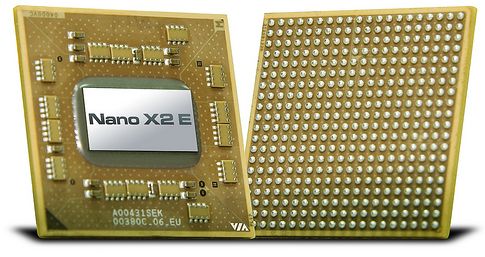 The VIA Nano X2 E-Series will come in 1.2 GHz and 1.6 GHz models. Both chips are built using a 40nm design and support Windows Embedded Standard 7, Windows CE, and Linux. The chips are pin-to-pin compatible with VIA Eden, Eden X2, C7, and VIA Nano E-Series chips which should make it possible for system builders to switch to the new chips with minimal fuss.

VIA is sampling the new processors to customers right now, and expects systems using the Nano X2 E-Series to ship in the second quarter of 2011.