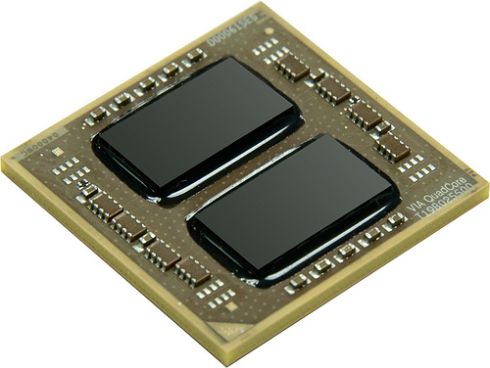 VIA Technologies has introduced its first quad core processor. The 1.2 GHz VIA QuadCore chip has a TDP (Thermal Design Power) of 27.5 watts. While that makes it a bit of an energy hog when compared with low power ARM or Intel Atom processors, I can’t think of another quad-core x86 chip that uses so little power.

The VIA QuadCore processors are 64-bit chips with 4MB of L2 cache, a 1333 MHz V4 Bus, out-of-order architecture, and support for hardware virtualization and AES hardware security features. The chips also support overclocking.

The chips are manufactured with a 40nm process and are pin-to-pin compatible with earlier VIA chips including the VIA Eden, VIA C7, VIA Nano E-Series, and VIA Eden X2. This will make it relatively easy for PC makers to offer the new quad-core chips without making major changes to their hardware designs.

VIA will begin showing the new QuadCore processors at Computex in Taiwan later this month, and expects to begin shipping the processors in volume during the third quarter of 2011.

With a TDP of 27.5 watts, my guess is that these chips could be used in desktop and laptop computers. I’d be surprised if we see any 10 inch or smaller netbooks powered by this chipset.