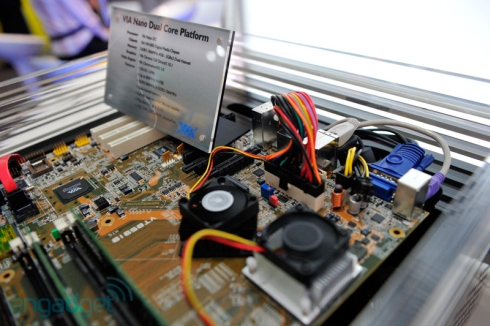 VIA’s Nano processors haven’t exactly revolutionized the mobile computing space, but the low power Nano chipset has been available to PC makers looking for an alternative to Intel’s Atom platform for the past year or so. This week at Computex, VIA is showing off the next-generation Nano chip, with a dual core processor.

The VIA Nano DC is a 1.6GHz dual core x86-based processor. The version on display at Computex was built using a 65nm processor, but the company says by the time the VIA Nano DC comes to market in about 6 months, the company will be using next-generation technology.

Engadget reports that VIA paired the demo chip with a VN1000 digital media chip, dual channel DDR3 memory, and a Chrome 520 grpahics processor to demonstrate its performance. The system doesn’t seem to have any trouble playing 720p HD video — but that’s not really saying much. Most Intel Atom-based netbooks can handle 720p video. You can check out Engadget’s video of the test rig after the break.

It’s also interesting to note that the Nano DC is originally destined for desktops rather than netbooks or tablets, since it generates a fair amount of heat.