VIA Technologies has unveiled the latest member of its ARTiGO slim PC family. The ARTiGO A1200 is a small form-factor desktop computer that measures just 9.6″ x 4.8″ x 1.2″ and weighs 2.6 pounds.

Despite the small case, it has a fanless design, thanks to a low power processor that doesn’t generate a lot of heat. 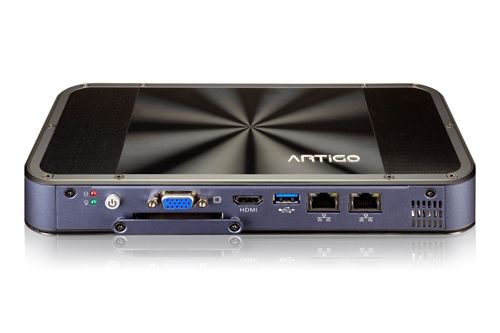 The VIA ARTiGO A1200 has a 1 GHz VIA Eden X2 dual core processor and VX900 media processor with support for 1080p HD video playback.

The little computer supports up to 4GB of DDR3 memory, has 4 USB 2.0 ports, two Ethernet ports, mic and headphone jacks, and an optional USB 3.0 host port. There are also VGA and HDMI ports.

Under the hood there’s a SATA interface for a 2.5 inch hard drive or solid state disk.

While the VIA Eden X2 processor is a low power chip that’s often aimed at embedded applications, the ARTiGO A1200 can run Windows 7 or Linux-based operating systems as well as Windows Embedded Standard 2009.

VIA is positioning the computer as a DIY kit for hobbyists looking to build a small, fanless low power computer. But it could also be used in business or industrial settings where it could be used to for digital signage, thin client systems, or other specialized services.

3 replies on “VIA introduces ARTiGO A1200 slim, fanless PC”